A Field Work Location: The Maring of the 1960's 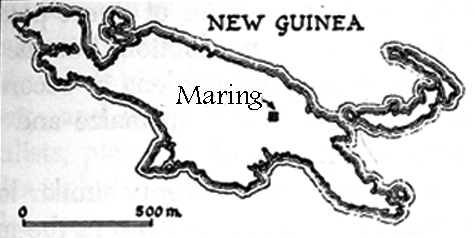 New Guinea is the second largest island on the planet. In 1963 it was home to approximately 2 million people who spoke more than 700 different languages. (see John Connell, Papua New Guinea: the struggle for development. The Psychology Press 1997.) In 1962, the western portion of the island was under Dutch colonial administration. In 1963 this portion was ceded to Indonesia and is now called Irian Jaya, or West Irian. At that time, the northeastern part of the island, called New Guinea, and the southern part, called Papua, were protectorates under the Australian Administration. In 1975, Papua and New Guinea became one independent nation: Papua New Guinea.

The coastal areas of this huge island were colonised in the second half of the 19th century, but the rugged topography prevented the early colonizers from entering the interior. They believed it was sparsely inhabited by small groups of hunters and gatherers.

It was only in the 1930's that gold prospectors discovered vast expanses of open valleys in the highlands, densely populated by people supporting themselves with swidden agriculture and inter-tribal trade. The Australian colonial administration made contact with these groups and soon gold miners, missionaries, traders, and anthropologists from all over the world were exploring and working throughout the area. The local people began to be drawn into the global culture.

But in the mountainous areas between the highlands and the coast, areas which airplanes and four-wheeled vehicles could not easily reach, groups of people lived who, up through the 1960's, had little or no direct contact with Western culture. They continued to live autonomous lives, drawing their livelihood from the surrounding forest.

It was one of these groups which, in 1962, drew the interest of Dr. A. Peter Vayda, professor at Columbia University, who was leading the team of four graduate students whose goal was to study "The Human Ecology of the New Guinea Rain Forest." In consultation with other anthropologists and government officers in Port Moresby, the team chose to work among the Maring. The Australian Administration had only just declared that area to be safe from warfare.

Our understanding of the Maring world of the 1960's is a complex construction. It is based on our own personal experience, observation, photography and research filming, as well as on the experiences we shared with the Rappaports and Vaydas.

The Maring area lies in the Bismarck Mountains on the western edge of Madang District.

The first Australian patrol had passed through the edge of the Maring area in 1954. By 1958, the Australian administration considered the area "pacified." In 1959, an airstrip was opened and a permanent patrol post was established at the headwaters of the Simbai River in the territory of the Karam people, the Maring's western neighbors. This was the locus from which, once the area was officially regarded as "controlled" in 1962, regular "European" influence was channeled. This influence came from the Australian patrol officer and various government health and agricultural officers who passed by in efforts to support development. In addition it came from Christian missionaries: the Anglicans, who built a mission station in Simbai, and the translators of the Summer Institute of Linguistics, who built a center nearby.

The Simbai Patrol Post was linked to the outside world by a two-way radio and an airstrip. A weekly scheduled government flight brought mail and supplies from Madang and occasional flights from the mission air service brought mission personnel. The airstrip could also be used by planes chartered by other people. In 1962, labor recruiters came in to sign up young men for two-year contracts of work at coastal plantations. As this first group of Maring were leaving Simbai for the coast, the first anthropologists arrived to study the Maring.

The Simbai Patrol Post was about an eight hour walk to the west of Maring territory. A "kiap road," a track made and maintained at the behest of the Patrol Officer by the people of each local group through whose territory it passed, linked Simbai to the Maring area. Unlike the local paths, the kiap road was meant to be neutral ground, and, indeed, when we were there, most local people felt safe walking on it even where it passed through their enemy's territory. For the anthropologists, as for all "Europeans" at that time, once one left the airplane at Simbai, the "kiap road," was the route to Maring country.

The Columbia University team set up housekeeping at two locations: the Rappaports in Dikai, which was a day's walk from Simbai; and the Vaydas, who we joined, in Gunts, which was a three day walk from the air strip. Our households consisted of several translators who spoke both Pidgin English and Maring, and several workboys who cut firewood, fetched water, cooked, washed dishes and laundry, and carried mail and supplies back and forth from the Patrol Post at Simbai.

Our photographs and fieldnotes were contextualized by information collected by the Rappaports and Vaydas through numerous interviews, surveys, mapping and weighing crops. Much of this information was brought together in Rappaport's pioneering book, "Pigs for the Ancestors," which set out some of the original tenets of ecological anthropology when it was first published in 1968.  This book further clarified the relationship between Maring ritual and ecology when it was reprinted in 1984.