The rugged slopes of the Bismarck Mountains, between the Jimi River to the south and the Simbai River to the north, were the home of the circa 7,000 Maring speakers. Maring territory straddled the divide between Madang District and the Western Highlands District. To the north lived the Gainj-speaking people; to the west, the Karam, and to the south, the Narak. Many individuals living near the edges of the Maring-speaking area were bilingual and sometimes trilingual. 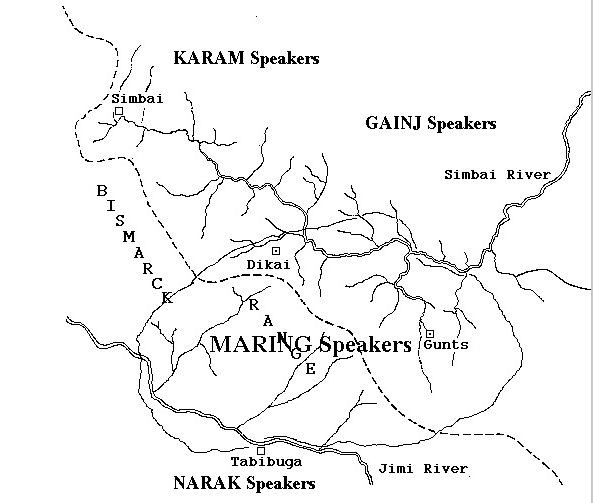 The Maring, similar to other peoples living in the mountainous areas surrounding the more densely populated high altitude valleys of the New Guinea Highlands, were swidden horticulturalists.Their territory stretched from the mountain ridges down to the river banks at the bottom of the valleys on each side of the mountains.

The high-altitude temperate forests provided the main hunting territory for the birds and marsupials whose feathers, fur, and skins were used for decorative and ceremonial purposes. (See the dark green areas ranging approximately between 5,000 ft. and 7,000 ft. in altitude.)

Lower down, the forest provided patches for swidden gardens.  (See the light green areas ranging approximatelyfrom 2,000 ft. to 5,000 ft. in altitude.) These gardens were cleared by the men and were fenced to protect the crops from the domesticated pigs which roamed freely throughout the area by day, finding much of their own food in the forest. The pigs returned to sleep in the hamlets at night, where the women fed them the scraps of their own harvest. Though pigs were central to the Maring society and economy, they were not plentiful, and pork was eaten only for ritual occasions. At those occasions, however, it was distributed widely through the kinship network and among allies.

Men planted and harvested sugarcane and bananas, while women cared for the great variety of vegetables and tubers - yams in the lowest altitude gardens (see the turquoise areas between approximately 1,000 ft. and 2,000 ft. in altitude), taros higher up, and sweet potatoes in all altitude ranges up to the highest gardens of all. Any given garden was was harvested over a period of two to three years, after which it was opened to the pigs, who rooted out all remaining tubers. The Maring practiced what could be called "differential weeding." Instead of taking out all weeds from the garden plots, tree saplings were allowed to remain. This meant that a three year old garden already had a number of small saplings well on their way to helping the abandoned garden revert to forest. In this way, the fallow cycle was speeded up.

In 1963 the Fungai were using steel axes and bush knives which had reached them shortly after World War II through the extensive network of indigenous trade routes. Glass and plastic trade beads, towels and lengths of fabric, and shells from coastal regions had reached them the same way. The largest part of their material culture, both tools and wearing apparel, however, was still locally produced. Materials for ceremonial items, such as wooden drums with possum-skin drumheads, feathers, fur, and beetle-carapace headdresses, were obtained from the forest. The arrows for hunting wild boars, for warfare, and for hunting birds each required a different type of wood and each were differently formed. Bows were made of black palm wood, while the bow strings were made of bamboo. Clothing and string bags were made by the women from various fibers, and often were decorated with bits of fur and natural dyes.