We are still thinking of you after so many years. We met you when you were all such little kids.

We came to New Guinea in 1963 and stayed in the Simbai Valley to learn how your people, the Maring, lived on the forested mountain slopes. The Rappaports, Skip and Annie, were in Dikai then. The Vaydas, Peter and Cherry, were in Gunts. That's where we lived, too.

When we went back to the United States in 1964, our first daughter was born. We wanted to name her after one of you, so she would have a namesake in New Guinea. We liked all your names, but if we wrote them in the various languages of our family - English and Polish - or in the language of the country where we lived - Italy - we would have had trouble spelling them and people would have had trouble pronouncing them. But we found a name that everyone could read and pronounce:

We named her Koram!

Friends of ours, in Italy and Israel, liked the name so much that they gave it to their daughters, too.

Now "our" Koram is all grown up and has three children, Nivan, Shiva, and Dariush.

So now we are grandparents, and we want to tell our grandchildren the story of our work in the Simbai Valley. We would also like to share our story with children all around the world, especially with the children who have grown up in the Simbai Valley since we were last there.

Do you remember our visit?

Many of your fathers and older brothers helped build the house we lived in. 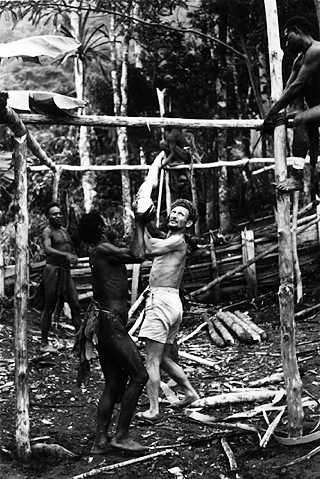 008-11: Bossboy Gul and Marek raise the ridge pole of the Jablonkos' house.

Almost every day you would spend some time in Gunts Yard, near our house. Sometimes you were there with your mothers. None of you went to school then, for the nearest school was in Gai, five hours walk away. Sometimes, while your mothers were away working in the gardens, the older girls looked after the little ones. Sometimes the boys played around Gunts yard, but more often they were off in the forest hunting lizards and grasshoppers. 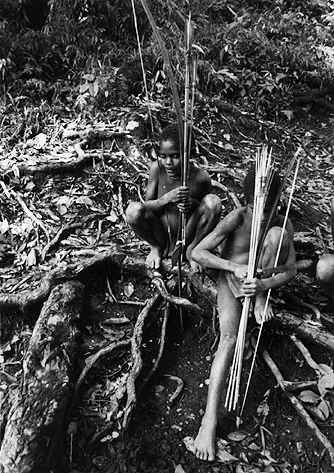 Do you ever see each other now? Do you ever talk about the yu mugi who stayed in Gunts when you were all children?

Yu mugi is what you called us. We have to translate from the Maring language into English for our grandchildren, because, of course, they don't know what yu mugi means. They are surprised when we tell them that it means "red men." "But you aren't RED!" they exclaim, "You are white!" We reply, "Oh, but we must have looked red, all right, after we had been walking in the strong sunlight for many days up and down the steep paths."

It didn't take long before you learned our names, Allison and Marek. But, out of respect, you were taught to call us apo and koka, which mean "grandmother" and "grandfather", and your mothers and fathers called us ama and anya, which mean "mother" and "father".

Do you ever tell stories about those times to the children where you live now? We like to tell our stories with pictures. On the following pages are some of the stories we remember best.